A COLLECTION OF CHARACTERS

You've seen the photos before. You've heard the stories. This is merely a refresher course. I'm in the mood for encores, reruns, regurgitation. A collection of characters, a photo album of my relatives.

I know a lot more about my mother's side of the family than my father's. All of my ancestors are from Hungary. My father's relatives were mostly from Budapest. His mother, my grandmother Szofia Santos, came from a tiny village near the Romanian border - not far from Transylvania.


My mother's relatives were from the Bakony Mountains, the Austro-Hungarian region. Her grandfather Janos Gurdon (or Gurdanyi) was of royal blood (no bullcrap - - it's true).

The photos are from my dusty archives. The descriptions are from the cobwebs of my memory. 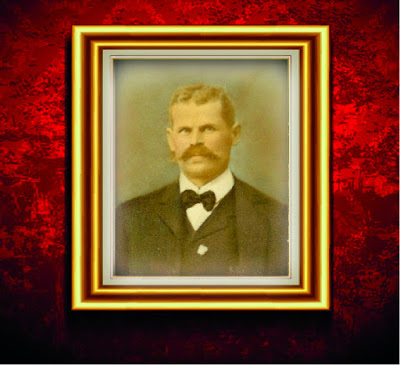 Born into a royal family, he was disinherited when he married a peasant girl named Justinia Schmidt. They moved to American around 1893 and had twelve children.
Their eldest child, Katalin (Kate), was murdered when she was eighteen. Ironically, the man who murdered her was her own uncle - the brother of her mother Justinia.

This is the birthplace of my great-grandfather John Gordon - near Borzavar, Hungary 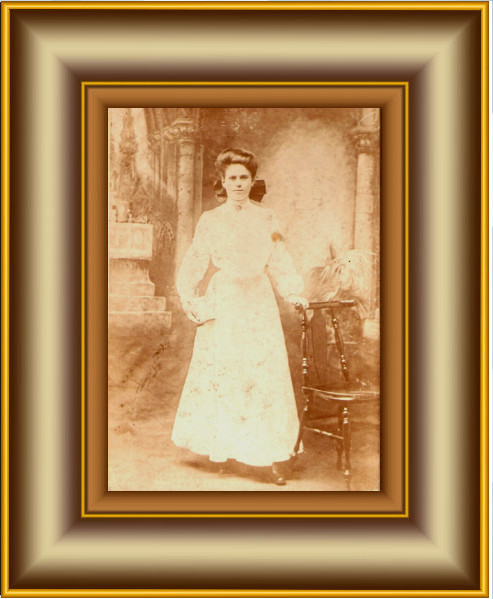 This is Katalin Gordon (1887-1906), eldest child of John and Justinia. She was my great-aunt, sister of my maternal grandmother Anna. This photo was taken only a week before she was murdered, in April, 1906. The white Easter dress that she's wearing is the dress she was buried in.

Katalin (Kate) was eighteen when she was killed by her uncle Frederick Lang (her mother's illegitimate brother). Lang was only 21 at the time. He was passionately in love with Kate and wanted to marry her. When she refused (and teased him) he pulled out a revolver and shot her through the neck at point-blank range.

Moral of the story? Don't ever tease a temperamental Hungarian. 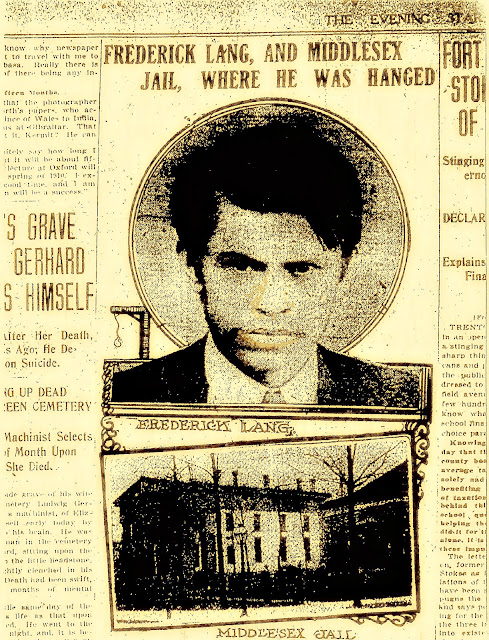 Frederick Lang (1885-1909). The brother of my great-grandmother Justinia Gordon (does that make him my great-uncle?).
After murdering his niece Katalin in April, 1906, he managed to escape and wasn't captured until July. The trial took place in Middlesex County, New Jersey, where he was found guilty and sentenced to death.

Despite his tough exterior, Frederick Lang wrote tender, impassioned letters to his mother in Hungary - begging for forgiveness. All the letters were confiscated by the authorities. His mother never saw them.
He was buried in an unmarked grave. My relatives refused to claim the body. 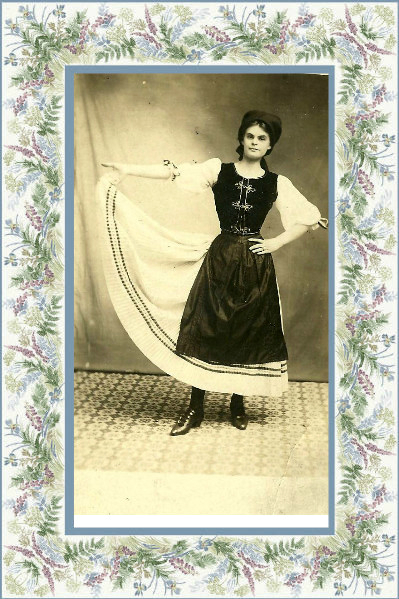 Maria Gordon (known as Mary). She was a sister of Katalin, and my great-aunt. Mary was with Katalin when she was murdered (Mary was 14 at the time).  After Fred Lang shot Katalin, Mary tried to escape. As she was running, he managed to shoot her in the elbow.

Mary is wearing a traditional Hungarian outfit in this photo. She eventually left New Jersey and established a ranch in Tucumcari, New Mexico (where she was known an Tucumcari Mary). She was always a flamboyant and colorful character. 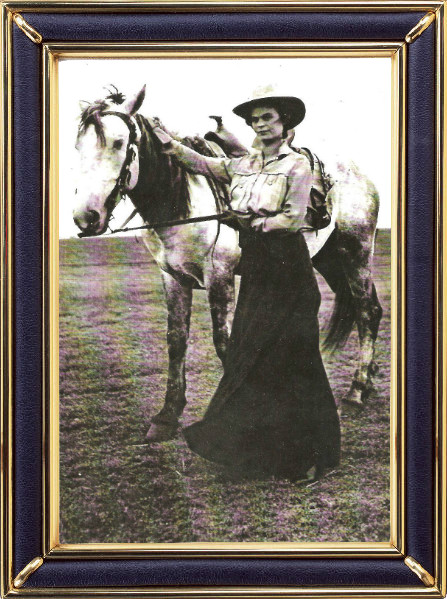 My great-aunt Mary in New Mexico, with her favorite horse. 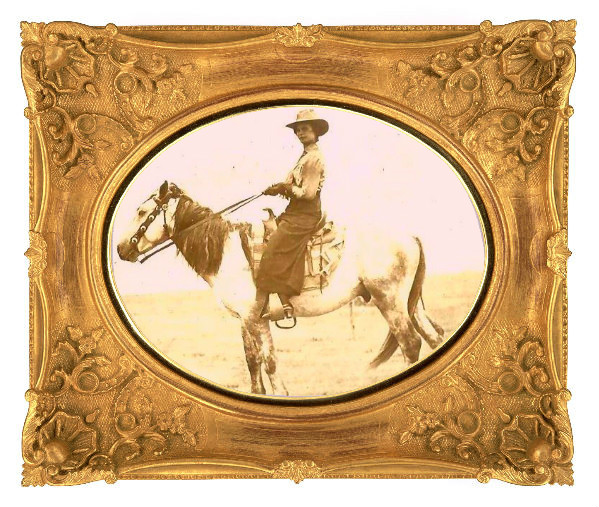 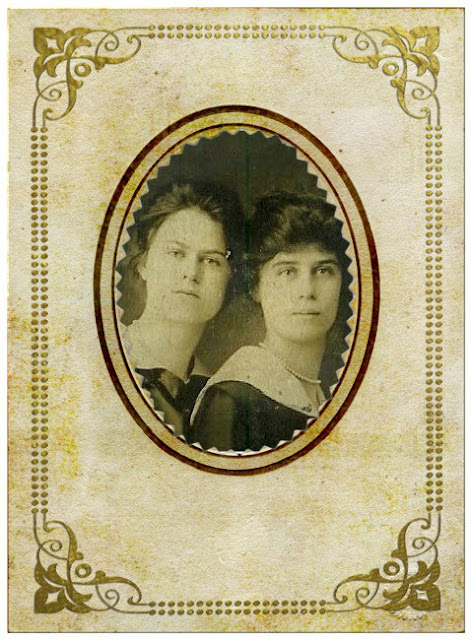 Two more of John and Justinia's twelve children. Lizabeth (on the left) and Anna (right). Anna is my maternal grandmother.
She was 10 years old in 1906 when Katalin was murdered.
This photo was taken around 1916. 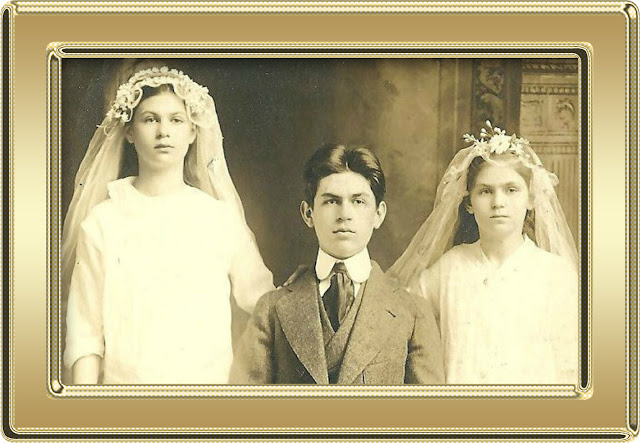 I knew all three of them when I was a small child in New Jersey. Juliana (my great aunt Jule) had an unhappy life with a very abusive husband.

Gizella (known as Aunt Gussie) never married. Her lifelong fear of men came from the fact that, at an early age, she had been roughed up by a drunk and nearly raped.

John Jr., by all accounts, was kind, humble, and led an exemplary life in upstate New York. 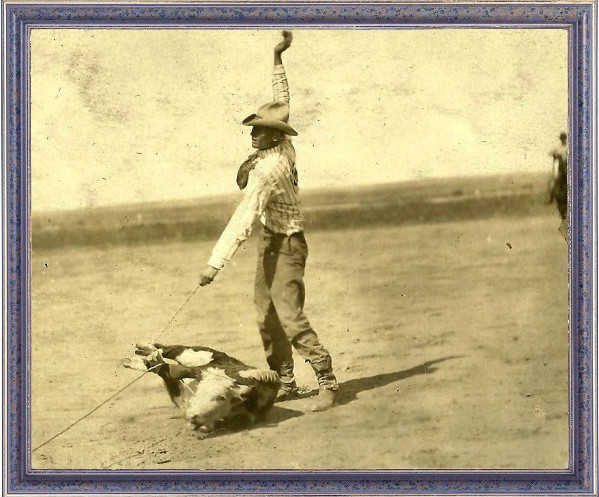 My great uncle George (Gyorgy) Gordon. The youngest of the Gordon children. Like his sister Mary, George left New Jersey and went to New Mexico, where he had a ranch near Clovis.

I saw him many times when I was young (he died when I was 20). I seldom knew a kinder, more generous person. And he told fascinating stories about life on the ranch.

This blog post is much longer than I intended it to be. I initially wanted to include photos from my father's family, too, but that will have to wait for a future post.

Note:
I wrote an article about the murder of Katalin Gordon, which was published in the December, 1997 issue of the New Jersey Monthly. I have since uncovered much more information and would like to write another article. 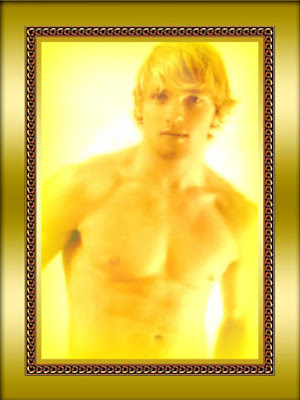 Perhaps the biggest character of all the relatives - - photo taken in the heyday of his vanished and sorely misspent youth (about 150 years ago).
Jonathan, Janos, alias "Maestro", "Faux Cowboy". And a few unmentionable names.

Pianist, writer, poet, artist, dreamer, blogger (I despise that term - it sounds so demeaning).
Posted by Jon at 5:05 AM