CONFESSIONS ON A GLOOMY AFTERNOON 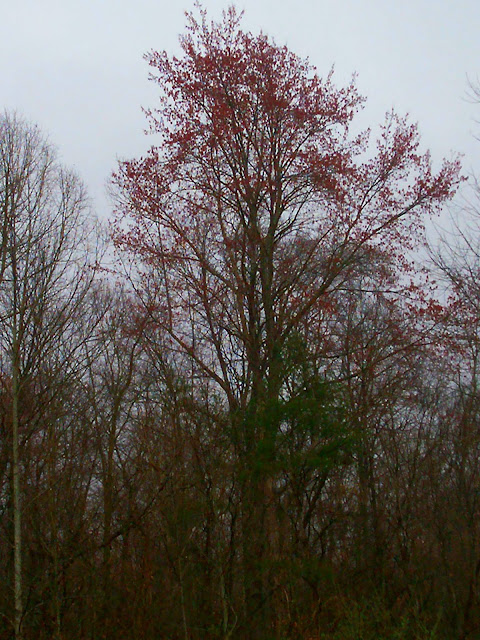 I'm watching the last of the spring blossoms on this rain-drenched afternoon. The temperature is dropping rapidly. Snow is expected to start falling by dusk and continue through the night. By dawn the blossoms will undoubtedly be a thing of the past.

A good time for a cup of hot tea, contemplation, and quasi-confessions.

I regret the fact that I no longer drink (booze, I'm talking about). Liquor is nearly impossible to obtain in this annoyingly "dry" part of Tennessee. My abstinence isn't voluntary, it's mandatory. But, hell, strong tea is good enough.
Almost. 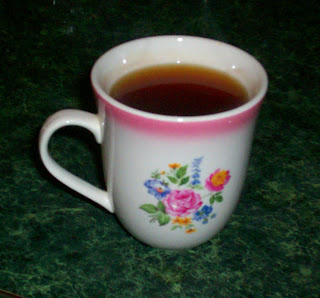 My very best confessions would be those  from my Hollywood years, but they are potent enough to render unsuspecting interlopers into shock and/or unconsciousness.
So I'll settle for more recent, non-toxic confessions.

I've always found writing to be a beneficial catharsis.
I also always appreciate the comments on this blog. It's comforting to know that people care.

I most often try to suppress my deepest personal problems from public consumption - but merely hinting about them probably makes everything seem more dire and mysterious than it really is. I've been depressed for a long time, mostly because of a long compilation of things that happened these past few years.

I had a fantastic life in California. Professional musician. Excitement. Glamour. More adventure than I knew what to do with. But I lived in the fast lane, reckless and dangerous. I was burning out quickly. By the time I was in my early 30's I was wasted. And the person I truly loved had died. It was time to leave.

I won't get into the reasons I wound up in the Missouri Ozarks - but I became a free-lance writer there and had success. I also got into an extremely detrimental relationship - which ended up in a long and horrendous ugly drama during which we nearly killed each other.
I regret all of it.
I regret believing a liar and catering to a hardcore alcoholic.
I regret not committing murder.

Am I trying to interject grim humor here??

I moved to Texas to be near my retired parents. But I immediately knew that Texas had been a huge mistake for them - - and for me.
Especially West Texas - which can be rough, uncouth, wild, and....difficult.
Texas is a great place if you were born there. For unsuspecting outsiders, it can be an unpleasant shock.
And especially for innocent midnight cowboys who were used to Hollywood Boulevard.
(Innocent??)

I did my best to adjust. I shed all the aspects of my true self and became a faux cowboy. I endured the brutal droughts, broiling heat, endless endless winds, unbelievable dust storms - the rattlesnakes, scorpions, chiggers, and fire ants.... 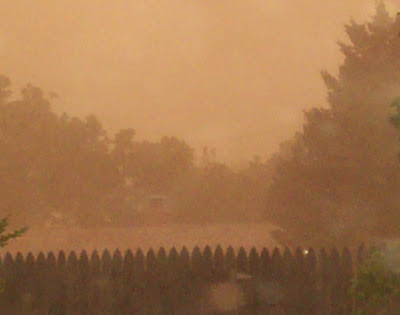 This was my back yard in Texas during a dust storm, also known as a Haboob.

After my father died - very unexpectedly - in 2005, I took care of my mother for the next four years. They were good, peaceful years - but it was heartbreaking to see a  truly beautiful and brilliant woman deteriorating so rapidly. Her mind remained sharp until she had a series of strokes. After that it was useless.....I couldn't begin to describe the agony, I've tried to expunge it all from my memory.

The last time I saw my mother, she called me "Carl". That was the name of her brother.
She died in December, 2009.

I was living comfortably in Texas - a beautiful house, four vehicles, no debts and perfect credit.
But I despised Texas and wanted to leave as soon as possible. That's when Fate noticed my discontent and plagued me with an eternal streak of bad luck.

I began losing my money. There were large medical bills (trust me, Medicare doesn't pay everything). There was a bogus business deal (I don't want to go into it). Then my savings were wiped out by identity theft.
Far too many details to explain....
I eventually had to sell my vehicles, antiques, and coin collections to survive.

My house was located in a rural area where nobody wanted to live - and subsequently it was impossible to sell.
My realtors were a trio of old ladies who were (to say the least) incompetent and indifferent.

To shorten an endless story, I put my house up for sale in February, 2010 - - and it finally sold in October, 2014. At a fraction of what it was worth.
By then I was nearly suicidal.

And the realtors were still alternately telling me the house is sold, it might be sold, we're not sure if it's sold.....
When the deal finally went through I had only one week to get out. I frantically worked 24/7 doing all the packing by myself:
a large house, a large storage room, three storage sheds, and an attic.

End of story? Not quite.
In my haste to leave Texas, unbeknownst to me, I hired the moving company from hell. I had to put my things in storage while I looked for a place to live in Tennessee.
I innocently had complete faith that a supposedly reputable moving company could transfer my possessions 1,000 miles with no problems. 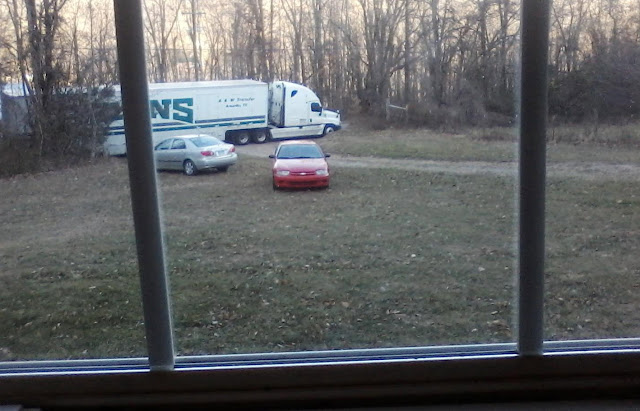 The moving van was much too large to get up the narrow road to my shack. They had to transfer everything into a smaller U Haul. Incidentally, the company I initially hired wasn't Bekins. It was Hart Moving and Storage. Hart inexplicably transferred my things to Bekins.

They not only made me wait two and a half months to get my things from Texas to Tennessee (supposedly due to the Christmas holidays), they also "lost" (or stole) many of my most cherished possessions - - including furniture, my piano music, my collection of rare antique books, costly paintings, and ALL of my personal hand-written diaries and journals that I had meticulously kept for 30 years.

Could it be worse?

Yup. I had paid them nearly $10,000 for moving and storage expenses.
And I couldn't afford moving insurance, which would have been a few thousand more.

In essence, I was financially raped and left for dead.

That's only a small part of my tales of woe. I left out a myriad of other horror stories simply because this post is far too long.

I won't mention the spinal injuries I sustained during my first winter in Tennessee when I fell on the ice. You've heard more than enough for now.

So, here I am - penniless in my drafty rural shack, listening to the cold wind howl, and waiting for the snow.....

Email ThisBlogThis!Share to TwitterShare to FacebookShare to Pinterest
Labels: confessions, my life, problems