It's nearly impossible to be raised in Southern California and not - in at least some small way - be affected by the movie industry. I was profoundly affected.

The distance of years and a semblance of maturity have slightly diminished my youthful enthusiasm for Hollywood, yet it still lingers with enduring persistence.

I was six years old when my family moved to California. At that long-ago time, remnants of Hollywood's golden past still lingered. The original Brown Derby restaurant was doing a brisk business on Wilshire Boulevard. Ciro's and the Coconut Grove were still hot night spots.

Movie stars were often out and about and sometimes accessible. We saw Harpo Marx on Hollywood Boulevard and Debbie Reynolds at the (then famous) Farmer's Market. I met comedian Henny Youngman on Olvera Street (the famed touristy Mexican street) when I was a kid. In my sublime youthful ignorance I'd never heard of him - but got his autograph anyway. 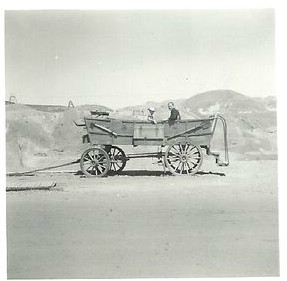 My father and I were stowaways in a wagon, on the set of Wagon Train somewhere in the Mojave Desert

As a child I had the privilege of seeing numerous TV shows being filmed on location (a friend of our family worked in the industry). Most notably I remember the movie ranch owned by stuntman/actor Ray "Crash" Corrigan, which was located in the Simi Valley, nestled in the scenic foothills of the Santa Susana Mountains.

Later known as Corriganville, it was in active use from the 1930's until around 1965. Hundreds of cowboy movies were filmed there and many TV shows including Gunsmoke, Rawhide, the Cisco Kid, Rin Tin Tin, the Lone Ranger, etc.
Unfortunately, all the movie sets were destroyed by a series of fires in the 1970's. 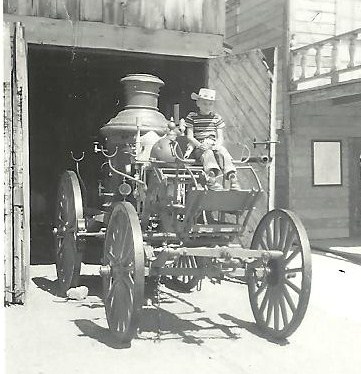 Me, age six or seven, inspecting an ancient fire engine on a movie set That's me in front of the fort which was used in the 1948 movie Fort Apache (that was before my time...) and many other movies. 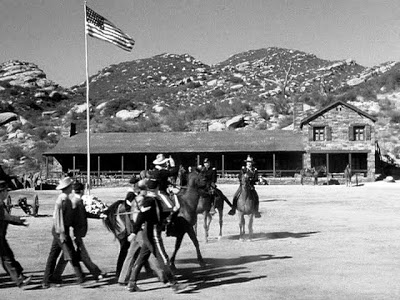 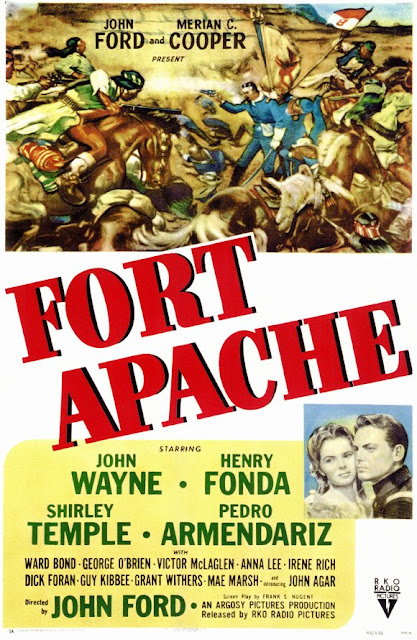 I never had any aspirations to be an actor or to work in the film industry, but I was still intrigued with it.

When I was in my 20's (and early 30's) I spent a lot of time in Hollywood and had the opportunity to mingle with some of the bigwigs. I met many stars - including John Wayne, Groucho Marx, Shelley Winters, Sammy Davis Jr., Raquel Welch, Cher, Ann Miller, Patty Duke, George Burns, Zsa Zsa Gabor (to name only a few).

Just for the heck of it, I also did a few stints as a movie extra and worked on such enormously forgettable pictures as Malibu Beach and Sgt. Pepper's Lonely Hearts Club Band.

My main interest, of course, was music and I exclusively concentrated on my work as a pianist.
Yet, my fascination with the film industry later inspired me when I was a freelance writer. I published many articles about Hollywood history (with an emphasis on the silent era). My main objective for writing was to resurrect the memory of forgotten stars and films.

My present existence as a semi-hermit in the Tennessee wilderness is very far removed from my California youth. My Hollywood memories linger tauntingly like echoes of a faded dream. 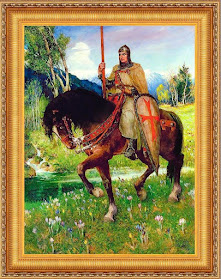 It's nearly impossible to be raised in Southern California and not - in at least some small way - be affected by the movie industry. I...