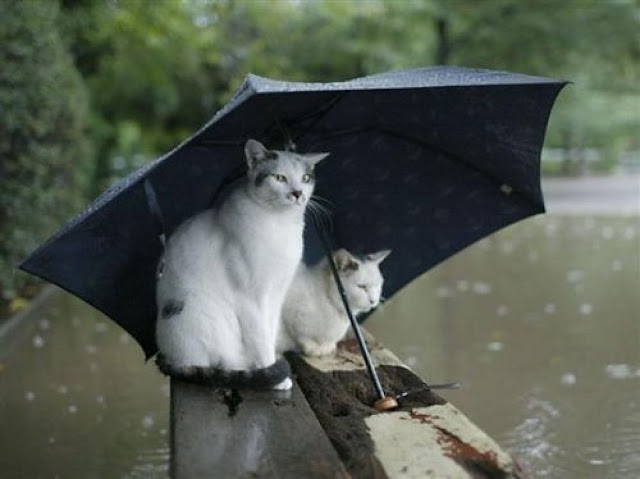 "Noah called. He picks us up in ten minutes."

Sit back, take a load off, and I'll tell you about my trip to town. Actually, the whole ordeal is too damn long, so I'll only offer selective highlights.

BTW, you won't really appreciate this unless you read my previous post RAGE. Even then, you might not appreciate it, but that's beside the point.

I desperately had to drive to town today, since I was nearly out of food and supplies. And I was completely out of cat food. My trio of felines haven't had a decent bite in two days. The last I saw, they were praying for mice.

Anyone who faithfully reads this blog (all three of you) knows how much I dread driving to town. It's an infinitely long stretch of dangerous, narrow, winding mountains roads. It scares the jeeters out of me on a good day. You can imagine my apprehension when it rains.

Today it didn't just rain. It was a non-stop Biblical deluge. I got up early and figured I'd wait until the rain tapered off. By 10:30 it was raining so hard that I was considering sending a dove out to look for an olive branch.

I finally realized that if I waited for the downpour to abate, I might be hanging around for months. As if on cue, a heavy mountain fog appeared as soon as I started driving. The windows steamed up and the rain was so torrential that seeing anything was an impossibility.

I did, however, see my entire life flash before my eyes multiple times. By the time I got to town my legs were limper than leftover spaghetti and I figured it would take the Jaws of Life to extract my fingers from the steering wheel.

The first thing I had to do was get gas (that's petrol, for those of you in Yorkshire). I was in line (in the store) waiting to pay the cashier. There was a grizzly old man in front of me (I'm old, but he was about fifty years older....).

Suddenly -
with absolutely no warning -
he turned toward me and let out the Mother of all sneezes. It was a direct hit. That son of a bitch anointed me with a Hillbilly Tsunami. I couldn't believe it.

I held my breath for nine and a half minutes until I got to the cashier - while silently putting every imaginable foul curse on him, and alternately praying for my own death.
All I really wanted to do was get home so I could boil my clothes and douse myself in lye soap and Listerine.

Next stop was the bank. I usually utilize the drive-through window, but today I had to go inside (I won't burden you with unnecessary details).
When I came out again, my car wouldn't start. It's a damn good thing I hadn't robbed the bank - I would have never gotten away.

Despite the pouring rain, I was forced to open the hood (that's the bonnet for those of you in Oxfordshire) and mess around with the engine while getting mercilessly drenched.
It took twenty minutes to start the car.

At this point I had no doubt that I was being punished for multitudinous past sins.

How multitudinous are your sins, Jon?

Let's put it this way: a priest once passed out as he was hearing my confessions. After he regained consciousness, we had sex.

Hey, don't sweat it. I only said that to scare my readers in Iowa.

I'm not Catholic. But I have made a few priests swoon in my time.

Thanks to this unnecessary and extremely distasteful detour, I've completely lost my chain of thought. It doesn't matter - this post is getting too long, anyway.

One more (unrelated) thing:
Why is the heat always turned up in the supermarket? Every time I go grocery shopping it's like being in Barstow in August. Today it was about 110 degrees in there. I felt like I was going to pass out and actually had to linger by the frozen chicken thighs to revive.

I have a lot more to tell but figure I'd better quit while I'm ahead. If indeed I am ahead.
In conclusion:
I miraculously made it home safely. It took forty rain-drenched slip-and-slide minutes to drag all the groceries up the muddy, perilously slick hill to my back door. This is the hilliest place I ever lived. It's like a Coney Island fun house.

The cats finally have food again. And - after I completely disinfect myself - I'm going to bed. It'll take a few days to recover.