This song is originally titled Ne Me Quitte Pas (Don't Leave Me) and was written in 1959 by Belgian singer/songwriter Jacques Brel. It was a lament for his girlfriend Suzanne Gabriello (Zizou) who left him. Zizou was pregnant.


Brel denied being the father of the baby. Zizou eventually had an abortion. Later, Jacques Brel said that Ne Me Quitte Pas was never intended as a love song, but rather as "a hymn to the cowardice of men."

Marlene Dietrich sings it in German - and in my humble opinion her rendition is far superior to Brel's. Dietrich recorded it several times and each version is unique  (I've heard this song by numerous other singers and none of them impressed me).

I was initially never a big Dietrich fan. I thought her talent was minimal and she was over-rated. When I was in my late teens, however, I discovered some of her recordings and my harsh opinion softened immensely. She was a mesmerizing singer and a superb cabaret performer. 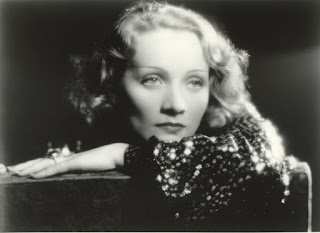 I first saw Der Blaue Engel (The Blue Angel) in one of those artsy Los Angeles movie revival houses. Perhaps my disdain for Dietrich was perpetuated by the fact that in Engel she was not only a mediocre actress but also a heartless bitch.

When I was around 18 or 19 I saw the 1947 flick The Golden Earrings (with Dietrich and Ray Milland) on the late show. The Hungarian theme won my heart, and Dietrich admittedly made one helluva intriguing gypsy.

I also like the exotic intrigue of Morocco (1930) and Shanghai Express (1932). Director Josef von Sternberg didn't exactly discover Dietrich (as he claimed) but he certainly did invent her.

So what about my video?
It's a humble tribute to the essence of Marlene Dietrich - singing one of my favorite songs. To perpetuate the "mood", I've set it against the backdrop of a rainy night.....