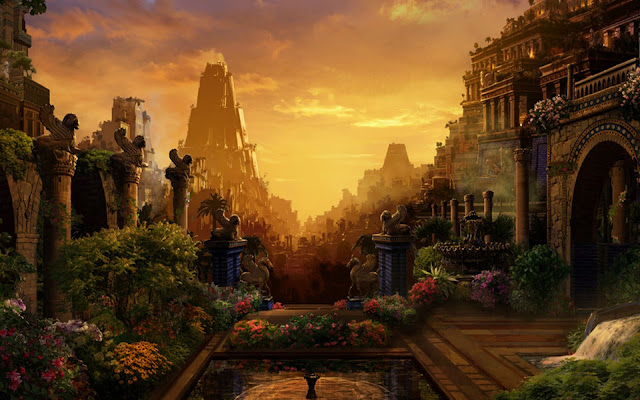 An exquisite October night. Autumn has penetrated my soul with unrelenting melancholy that is both soothing and sobering.

Despite numerous obstacles and an acute absence of motivation, I've made progress on my latest writing endeavors. I've finished my book for children - eighteen poems inspired by the night. Traditional poetry that rhymes. I thoroughly enjoyed writing this and completed it in less than two weeks - - still compiling illustrations and deciding on a title.

I'm working on my memoir, which is not exactly a labor of love but rather a painful excavation of unhallowed graves.

I'm also working on another poetry book, In the Shadow of Babylonian Kings,  which I'm certain will be my last: a compilation of my final poems, arguably more mature than those in Love Letters to Ghosts.

As for blogging, it often becomes a thankless burden. But, then, writing - in any public forum - takes authors down frustrating paths to perilous places. Over the years I've spent far too much time blogging which, in essence, is an exercise in absolute futility.


I'll end with a curious (and probably unwanted) offering: a random sample of poems from In the Shadow of Babylonian Kings.

Banished
from the lofty realms of righteousness
they tumble beyond
a cradle of clouds
in swift descent
to the open arms of mortal desire
and the sweet embrace of Sodom.

In time
the giddy pleasures of their pursuit
collapse
like the plans of intended kingdoms,
and the sacrifice becomes a burden
thicker than sun-sparked desert sands.
Unholy desires assume the futile proportions
of desperate seasons
in search of an impossible rain.

The great warehouse of their intentions
begins to fade and tarnish
like too many bracelets on the arms
of a king's forgotten concubine.

There is a gnawing desire for atonement
towards the end
that unleashes previously unknown reserves
of inner courage or strength,
neither heroic nor admirable
but inspired by absolute necessity.
The journey, of course, has been
an unrelenting burden,
the weight of which remains unnoticed
until the enormous final battle
when all is lost and little is forgiven.
It will be quick,
this ultimate stroke of merciful justice -
this undeniable act of self-preservation.
I will not be missed.


Jon V.
from In the Shadow of Babylonian Kings

My other blog is dying, which seems extremely appropriate for me. I'll probably abandon it soon because I'm losing interest.

Here's a link, just for the heck of it.
Cabinet of Curious Treasures
Posted by Jon at 9:15 AM