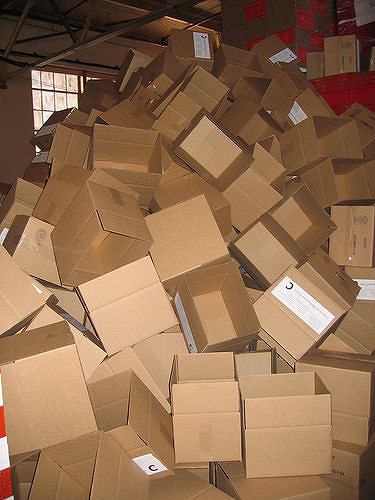 I got this photo from the Internet, but it looks very similar to my garage

Remember the blog post entitled Lights Out in Hickville that I wrote over a week ago? Big storm. Power outage.

Well, we had another storm - exactly the same - this past weekend. Only it was bigger, longer, and more annoying. And, of course, there was a power outage.

Today started out sunny - - which literally shocked my sun-starved senses - - but, in true Tennessee fashion, another huge thunderstorm rolled in this afternoon.
Dry days don't exist.

Lately, I've been desperately trying to clean up the garage - which is something I should have done when I first moved here, but it was in such appalling shape that I finally gave up.

There were over three hundred empty cardboard boxes piled up. No, I'm not exaggerating. I counted them. And I had absolutely no way to get rid of them.

When I lived in Texas I had a big pickup truck. I lived two miles from the dump. And the small town where I lived had a cardboard recycling center. Ditching boxes was easy.

Here in Hickville I only have a small Toyota. I live a zillion miles from town and have to haul my trash to the tiny town garbage place (I don't know what the hell they call it).
Bringing three hundred huge boxes would be somewhat of a slight challenge.

For two years I've been devising ways to destroy these boxes.
I thought of burning them, but I don't have a burning permit. And since I have no pyromaniac tendencies, I'd probably fail miserably. Besides, it rains so much here that it would be completely impossible to keep a fire going. Or to even light one.

So, I scanned the Internet to see if I could discover some way of eliminating cardboard boxes.

The information I came up with was so infuriatingly lame that my blood pressure soared to comatose levels.
Who the hell writes these worthless jackass articles??

One woman wrote an article that encouraged us to use the boxes for our children to play in.
"You can build a fort out of the boxes", she suggested, "Which will give your children hours of pleasure."

Is she out of her frickin' mind????
If I had some firewood and a match (and a dry day) I would personally like to burn her at a stake.

Yea, lady. I'll build a fort to keep the Indians out.
Or are they Native Americans?

Another woman, in another online article, suggested to sell the cardboard boxes.

With the money I make I'll move to Monte Carlo.

Someone else said to "donate the boxes to a charity."

Great idea, Bucko. I'll donate them to the Hillbilly Debutante Society. Maybe they can use them for box lunches at an afternoon tea.

Completely at my wits end, I decided it was time to devise my own method of destruction. I did it the Old Fashioned Way.

Armed with work gloves and a generous supply of bug spray, I went in the garage and proceeded to tear up every one of the freaking three hundred boxes into small pieces and stuff the shreds into big trash bags.

It was a Demolition Marathon that took several weeks to complete. Tearing up heavy cardboard moving boxes is bad enough. Getting the packing tape off them is even worse.

I still have about twenty boxes to go, but I consider my efforts to be a major step toward progress.