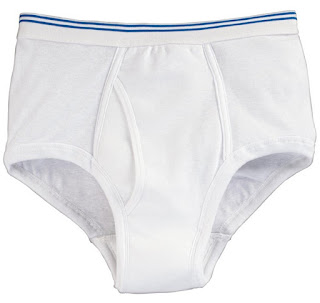 Apparently it's pretty easy to get into my drawers, but I think you already knew that.

Jon, why don't you move way out into the countryside - away from trouble and stress? It'll be fun!

That was me talking to myself a few years ago.

That's the sound of me kicking my ass today.
Question:
If an ass is kicked in the forest and nobody's there, does it still make a sound? (don't ponder that for too long - you might hear something).

All right. Let's cut to the chase.

It's no secret that I've been having problems with wild animals ever since I first moved here.
Squirrels are in the roof. Unknown creatures are under the house.
I've had two (TWO - count 'em) 'possums inside the house (I've done blog posts about those adventures).

And then there are mice.
My cat Scruffy deposited a dead mouse in my bed once. Right by my pillow.
A few nights ago Bosco killed a mouse and (thankfully) left it by the front door.

I grew apprehensive- to say the least- when I recently heard post-midnight scratching noises in one of my desks.
It's a small desk that my parents bought for me when I was about fourteen. I've kept it for sentimental reasons.

Yesterday, in the safety of daylight, I cautiously opened a drawer - already knowing what I was going to find.

Sure enough, there were not only mouse "droppings", but the little bastards had started eating some of my file folders!!! 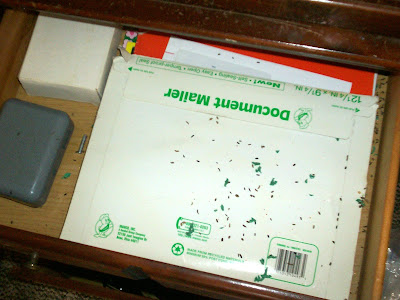 mouse droppings in my drawers

That was only the first drawer. The others were far worse. 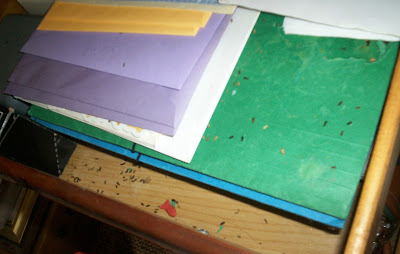 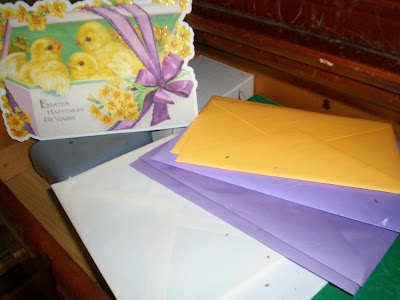 They even took sporadic shits on the Easter cards that I had planned to send to friends and relatives.

Trying to look at the bright side (hahahaha), I said
"Well, at least they didn't urinate in the drawers."

That was right before I opened the lower drawer and was greeted by an odious puddle of rodent piss. 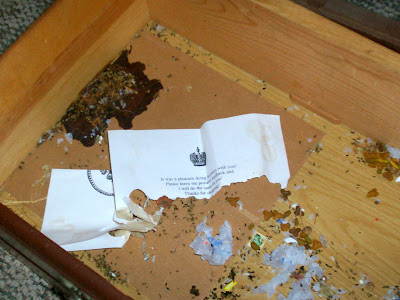 When they weren't crapping and peeing, they were obviously stockpiling cat food. 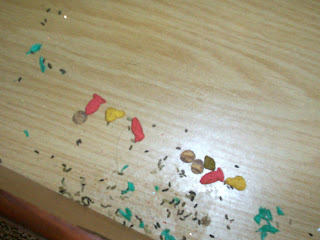 They gnawed the tail off this old mechanical Easter chick, which I bought a few years ago for the cats to play with. You wind it up and it hops along the floor. 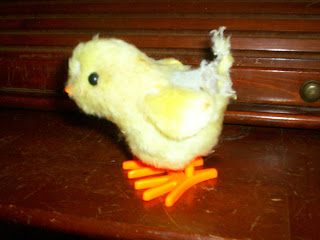 They also emptied this basket of California seashells and used it for a nest!!! I cleaned the basket and salvaged the shells. 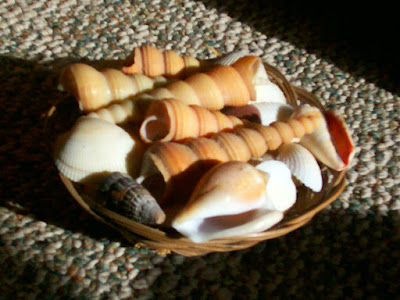 I had initially reserved Saturday afternoon for working on some long-neglected important projects. Instead, I had to spend hours cleaning and disinfecting the desk. And I was forced to throw out many of the things that were in the drawers.

Fortunately, the mice had peed on some thick cardboard instead on the desk drawer itself. Thank God for small favors. No permanent stains. 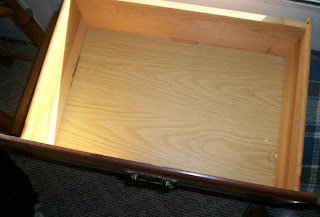 Here's the last laugh.
In one of the drawers I found this box of Chinese stress balls.
They are a pair of silver balls that you place in the palm of your hand to relieve stress. When you move them around they make a soothing, vibrating sound.

So, here I am -
devising ways to kill the mice....
and playing with my balls. 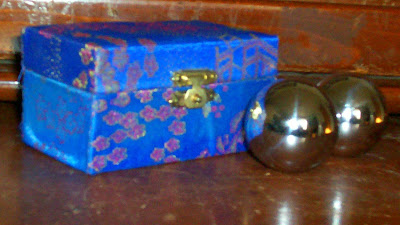 Note: the Oscar post on my sidebar was written last year.
Posted by Jon at 1:21 AM