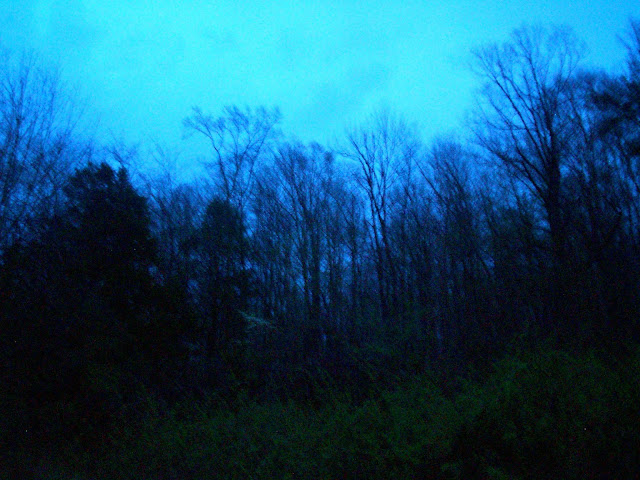 Tonight (actually last night) I had one of my beyond insane moments. My stupidity even baffled myself.

First of all, rural Tennessee had fantastic weather for the past two days. Thursday and Friday were near perfect: sunny, low humidity, in the 70's (that's Fahrenheit, for those of you in Antwerp). I savored every moment because I knew it wouldn't last. I'd be pressing my luck to the limit if I thought we'd ever get three good days.

Sure enough, the rain began on Friday night and continued all day Saturday without letup. As usual, everything immediately got sopped, soggy, and incredibly muddy.

I was worried about getting my mail.
That's right. My mail.

I think I've already explained (in a previous post) that my mailbox is infuriatingly far away from my house. You need pack mules and hiking gear to get there.

But the hike isn't the problem. The problem is that the latch on my mailbox doesn't work properly, so the door always falls open and all my mail inevitably gets completely drenched. The other day I got some letters that were so soaked I could hardly read them. I tried to salvage them with a hairdryer.

So why don't you fix the latch, Jon?

I tried fixing it, but nothing worked.
I attempted to buy a new one but the latch I found at the hardware store was nearly $30 and didn't look like it would fit.

Hey, for thirty bucks I could eat for three weeks. Or buy a year's supply of clothing at Walmart.

Why don't you buy a new mailbox, Jon?

I will, Kemosabe, as soon as I win the lottery. Now keep your damn suggestions to yourself. You're ruining my good story.


The rain continued after dark. It poured until long after midnight.
Then - - -
for a few blessedly glorious and intensely rare moments the rain let up.
It showered. Then drizzled. Then stopped.

In a hasty and hysterical moment of profoundly irrational judgement I said to myself:

"Holy shit, Jon - if you hurry like hell you might be able to make it to the mailbox before the rain resumes!"

I didn't care if it was after midnight. I was ready to go!
I put on my boots and hat, grabbed a flashlight, and zoomed out the door.

Well, it wasn't exactly a "zoom". I just threw that in for cheap literary effect.

I wasn't about to walk there. This place can scare the jeeters out of you even in the daylight. I had to take the car.

To make a long story short (which at this point is a complete impossibility),
I safely reached the mailbox. Of course, it was wide open. And all my mail was thoroughly drenched.

As I plopped the pasty layers of postal pulp down on the seat next to me, it started pouring rain again.

I could hardly see to drive back, and as I tried to make my way up the steep hill that leads to my house the inevitable happened: I got stuck in the mud.

It's happened to me many times before but I always managed to get out. This time I was really stuck and every maneuver was futile. 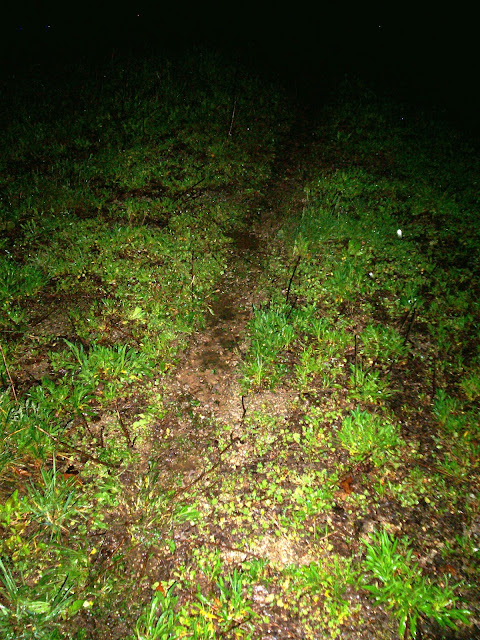 This is the good, safe part of the trail up by my house. I got stuck in the mud way down in the dark part (photo taken with camera flash)


I remembered hearing (somewhere) that if your car is ever stuck in the mud
1. don't panic
and
2. don't press your foot down on the accelerator.

I panicked. I pressed the living hell out of the accelerator - while the wheels screeched and spun and the car was enshrouded in billowing clouds of smoke and splattered with mud.

In exasperation I opened the door and got out. As I sunk into mud nearly up to my knees, the car started rolling backwards down the hill! I stopped it just in time and frantically turned the steering wheel to steady the roving tires.
I could go in reverse but not forward.

I decided that I only had two alternatives:
1. Leave the car there until it stopped raining and things dried out (which probably wouldn't happen until some time in late August)
or
2. Get some traction.

What could I use? Cat litter?
Naw, the cats need it more than the car.

Then I thought of cardboard. There was plenty of it in the garage.

I slipped and slid my way through the mud back to the house in the torrential rain. Got cardboard from the garage. Trudged back to the car and placed it in front of the tires.

Remnants of the soaked cardboard afterwards

There's more to this after-midnight nightmare - -
like the large owl that was continually harassing me from a nearby tree while I was stuck in the mud...
.....and how I slipped all the way down an embankment on my way to the garage.....

but I've supplied you with enough information to envision my miserable plight.

The only thing I'll add is that it's now Sunday afternoon as I write this - -
and still pouring rain.