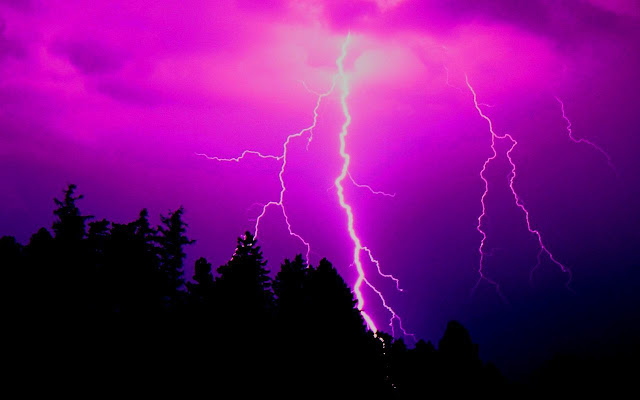 Another thunderstorm this afternoon and I actually enjoyed it. The clouds blew in quickly on a warm, fierce wind and the rain was heavy but brief. A cooling diversion on a hot, sultry day.

A lightning strike seared a distant tree but was immediately expunged by relentless rain. Should I be worried now that I have a metal roof, live very near a power pole, and have that annoying satellite dish by the house? The previous owners left a tangible reminder of Dish Network. 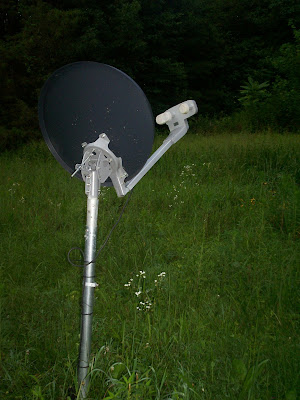 Storms seldom scare me but I have a very healthy respect for lightning. And I have a few harrowing memories of close lightning calls which kindle my respect with every current storm.

Ironically, two of my vivid lightning memories occurred in Southern California - where fierce storms are scarce and dangerous lightning is seldom a threat.

A freak lightning accident happened on the campus of the very first college I attended. It was located in Orange County about three miles from my parent's home.

One spring afternoon there was a brief and very light rainstorm. No thunder or lightning was detected. Suddenly - out of absolutely nowhere - a fierce bolt of lightning struck directly beside the campus swimming pool, instantly killing a male student. The lightning bolt then ricocheted to the nearby campus golf course and struck another man. The man survived the strike, but the bolt destroyed the wristwatch that he was wearing.

I was in class on campus at the time and the lightning strike was deafeningly loud. My Mom later told me that at that very moment she was on the phone talking with a friend, and the sound of the strike was so loud (three miles away) that they both simultaneously dropped the telephone receivers!

The next day I went to the swimming pool where the strike occurred. There was a hole in the concrete about four feet across and nearly a foot deep.

Years earlier, when I was in the seventh grade, another frighteningly memorable lightning incident happened. I was an eleven-year-old student at Dale Junior High in Anaheim, California. 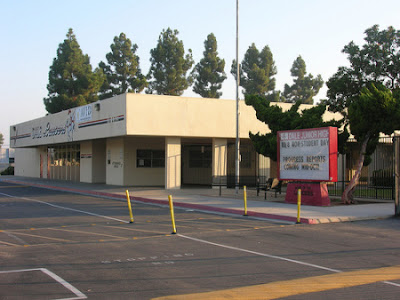 This is the only photo I could find of Dale Junior High. It's still located in the same place, but looks different than I remember it.
(of course, when I was a student there Abraham Lincoln was president)

I always walked to school, but if the weather was particularly foul my Mom would drive me.

On this day I was in English class, and the classroom windows faced Dale Street - right in front of the school. English was my last class of the day. It was pouring rain. I happened to look out the window and saw my Mom's car pull up. It was a relief to know I wouldn't have to walk home.

My Mother had only been parked there a few minutes when a lightning bolt struck a power pole directly where she was parked. It was only a few feet from her car. All the lights went out in our classroom and I saw Mom leap out of the car. Fortunately she was unharmed.

This post is getting long but I'm on a roll. I have a few more stories to tell.

I'm in my 30's, living in the Missouri Ozarks where storms are frequent and fierce.

During a raging thunderstorm I decide to quell my fear by playing the piano. I remember that it was Mozart's A minor sonata. There is a big maple tree right outside the window.

The tree is suddenly struck by lightning. I hear a ZING go through the lamp on the piano and the lights go out. I also feel a distinct electrical charge tingle through my hands - and I'm wearing a ring on each hand (I usually don't wear rings when I play the piano).

I saved the scariest for last.

It's December. My retired parents are living in Texas. It's snowing and they're watching TV. The TV has an old antenna hookup (the antenna is on the roof). A freak thunderstorm happens in the midst of the snow.

My Mother - who's terrified of storms - jumps up to turn off the TV. As she touches the TV dial, a jolt of electricity goes up her left arm (she's left-handed). Incredibly, when she examines her arm she discovers a dark distinct burn mark on the inside of her arm, near the elbow.

Her arm is numb and has a tingling sensation for days. The only thing we can assume is that a charge of electricity went up her arm when she touched the dial and exited near her elbow.

Mom refused to get any medical help for this. She eventually regained the use of her arm, but the black burn mark remained the rest of her life.